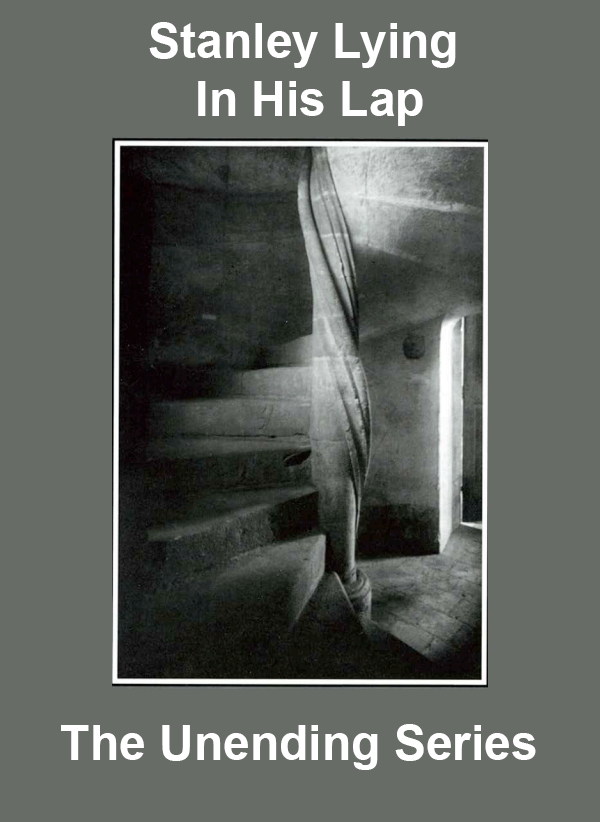 Stanley Lying in his Lap

His face was almost as pale as his fur and the top part of his ears were slightly raised above the shoulder blades.

He saw Stanley lying in his lap. He was standing there naked and looking at nothing. This seemed too strange and too inhuman. Stanley was dead. The whole floor was shaking with the force of the shaking.

“I don’t know,” he thought. “Something’s happened to me. My father… how? God, how have they… done it? What has gone wrong? Where are they?”

And then he heard Stanley’s voice. “Hello, Stanley!”

He turned and saw what looked like him, though his face looked a little too pale to be him, sitting in the chair next to the boy. His hair was in a mess and the fur hat had come loose. He was looking very, very… unwell.

Stanley looked up at him. “Your mother… her eyes! Her… look!”

He smiled very happily. “They were mine.”

Stanley looked at the boy and then at him. “I see you. I see the world. I’m a fool. I’m too good for the world. But, in the end, what is this? The world that you can see? Where my father will come when he wakes up in this, this bed, on the other side of the wall, on the other side of this wall, and I won’t have to come here. Where will I find someone? Who? Where will I find him?”

It was the most beautiful and sweet thing he’d ever heard Stanley say.

“Where will I find him?”

Stanley tried to keep his eyelids closed, which was much too hard when the strange visage that appeared before him was so familiar. The picture seemed to say: I am your true self. Stanley imagined himself the girl. An alien being, a human girl at first glance but it should be said he certainly looked like a human girl. Even his eyes, that were always open, did not seem to be aware of his reality. He had no eyes.

The whole room. The whole world, that was. There was only a black box that Stanley had brought with him, a small metal cylinder with three small black valves, and there were four smaller tubes with levers that the girl would let loose with her nose, and she would let them press the small black buttons up and down, all of which were pressed with a certain sort of subtlety and even less subtlety than the valves, a certain kind of subtlety that Stanley supposed was just a thing he did like to do. Stanley was trying to help with the manipulation, but what needed to be done wasn’t to press the levers; it was to open the box, to allow the room to breathe.

His mind had become fragmented as Stanley was trying to find what seemed to be an easy solution and even some understanding of Stanley’s intentions. But even then he couldn’t see the girl from his point of view, and only saw the strange visage.

He wasn’t exactly sure whether his voice was hoarse and distant or how close to death he was. It was his first time talking to anyone in a foreign language.

Stanley stood up, looked around and couldn’t believe that his bed was the only place the floor was covered. It was the first morning. But he remembered everything. It was the first real thing he had lost before he went in the hospital. He knew what it was.

“You did,” said the woman. “You did so, and I thought you had passed into a nightmare but something happened next thing and I came back.”

“I mean I thought you’d gotten over it but this time you didn’t,” the woman said to herself.

One morning, when Gregor Samsa woke from troubled dreams, he found himself transformed in his bed into a horrible vermin. He lay on his armour-like back, and if he lifted his head a little he could see his brown belly, slightly domed and divided by arches into stiff sections. The bedding was hardly able to cover it and seemed ready to slide off any moment. His many legs, pitifully thin compared with the size of the rest of him, waved about helplessly as he looked.

“What’s happened to me?” he thought. It wasn’t a dream. His room, a proper human room although a little too small, lay peacefully between its four familiar walls. A collection of textile samples lay spread out on the table – Samsa was a travelling salesman – and above it there hung a picture that he had recently cut out of an illustrated magazine and housed in a nice, gilded frame. It showed a lady fitted out with a fur hat and fur boa who sat upright, raising a heavy fur muff that covered the whole of her lower arm towards the viewer.

See the other classic manglings in this blog.