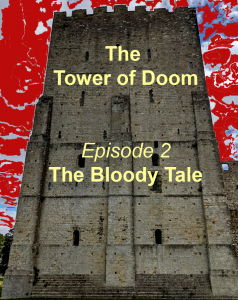 Episode 2 of the Tower of Doom.

Any horror/death related texts will be in this series. You have been warned. Although they are pretty innocuous.

See also Tower of Doom 1: The Distant Shout of the Great Storm.

This is not part of the classic literature series. I am generating text from short phrases that I use in various situations. The first half sentence was the prompt, up to the comma.

I’m not trying to oppress you, I just mean to show you something. I believe we need to make a choice, I think we should all make a choice to do something.

And her story: “I don’t know what happened, I’m afraid, but I will tell you what happened. I woke up and it was very dark, very dark. I’d go outside, in the kitchen, and I was sitting in my bed, looking up at the stars and thinking, well it just isn’t right to be alive.

I went to her room and there was some blood on my room and the bed sheets and it just kept going.”

“I was afraid I would die. I was afraid that I would never see my baby again. I don’t know what I did. I just had to stop. I just stayed in my bed and went to the sink and went for my mouth. I just held my hand up and let the blood go and I took a breath. I put it down and started working and it went away, I held the hand up in the sink and I looked at the ceiling and I started working again and then it just was gone. It wasn’t there.”

The police officers were able to identify her after she stopped breathing on her way to hospital, the report says.

“We tried all kinds of measures. We took her to the bathroom, we took her to the hospital. She looked just as she had on the day of the accident. She started to move from her bed to her legs. We pulled her leg away from her body and we took her down to the basement and then we found her by the kitchen sink. And by the house by the porch, her clothes were in a pile, she was breathing again.”

Amber says when she went to the hospital she told the police there were no drugs in her system. There was no blood in her lungs, her heart was working fine and her lungs were filled with air. But she was still very badly dehydrated.

She was then taken back to the hospital, where she was put on a hydration drip. Amber says that doctors eventually told her that she was dehydrated to the point of being a ‘suicide.’ She also reported that there was no way she could continue her life without the drip.

“To me it was not a death because she was still alive, but I was dehydrated and had not given a shit.” She went to a rehabilitation centre.

She says while in rehab she was made to drink water and drink milk so that doctors could know that she was not dehydrated and unable to do the job properly. When she went to this rehabilitation centre she went in there and it was her friend that said ‘hey can I go now and make you tea and that would do’.

So she did, then they put her on another drip and she went on a different drip for the next three hours. And the first three hours were hell. At first it was okay, then it became extremely bad. I mean I couldn’t really move, my feet were like dead, I couldn’t crawl, my skin was peeling off. I couldn’t move my arms and legs.

Eventually it got to this point that I was sweating on the floor and I couldn’t move, if you look at the picture you can see that it was horrible.

You don’t know how it is going to work out. We had had two years of recovery and, for me at that time, it was a nightmare. I couldn’t even walk without it because if I fell down to the floor I wouldn’t be able to stand up again and my legs would be like little pieces of paper that were just crawling on the ground but it was a nightmare.