(There was no Likart scale.) 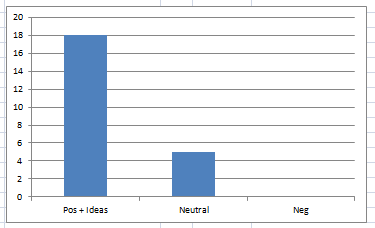 All comments were positive and neutral in this final section.
Four plagiarism comments and one fake news comment were also in here (and have been moved), showing it is useful to have a general question at the end to pick up any last-minute additions.
Plagiarism is perhaps something that bothers professional writers.

Joy evident, with Tentative and Analytical, to be expected as serious comments, low Confidence as usual.

Very easy to use.

I never adjusted the settings for the text generator. In hindsight that might have been something to try.

Excited, willing to see what happens next, willing to change the way it was originally written and to receive new ideas.

It’s an interesting experiment.  How useful it could be to working writer is debatable.  I’ve used word generators in the past to help compose titles, tag lines and character names.  Having text written for me doesn’t really fit with my needs as a pro.

The relevance and flow of the generated text reduces the further away from the original text it is. Should have option to limit generated text to e.g. just the next sentence or para

Lot of nonsense sometimes interesting good for experimenting getting started. Would suit short form not novels

It was certainly fun to use but I’m not altogether sure where it would be used in practice. Also  I guess the point was to use the same picture to provide comparisons but it would have been fun to have different options there

Could see this being useful as a problem solver. May help in story creation to provide different potential story lines.

I think it’s a very good idea but it might still need some work in the logic department. The generator can’t quite grasp it yet.

The system reminded me of an autistic childish once met. He had loads of potential but found it hard to formulate original questions to enable him to engage in extended conversation successfully with a stranger unfamiliar with his condition. You had to adapt to his way of making sense of the world then it was fine. You had to do more work than usual but it was worth it because he was another human soul. [Yet it was mentally and emotionally exhausting. Editor-sentence removed in IBM TA as skewed Sadness sentiment, and is not talking about the experiment but autism] Whether it is worth putting similar work in to adapt to a software system is debatable. Is it a tool or a collaborator? A slave or a colleague? How does slavery effect the enslaver psychologically? It is quite fascinating and I had forgotten the excitement I have had at research centres working with people who shared their ideas.

No. All OK and worked well. Fast and responsive.

I think that it will be a long time before text generated by a machine can match the human imagination. The text provided seemed unconnected – or at least, hanging on by a mere thread of similar meaning.

I liked the photo. I thought it was fascinating and it enabled me to think of a story easily.

For me, the best thing about this experience was having a random picture of a dog on a guy’s shoulder to generate a story from. I felt I could go a long way with this and didn’t need the generated text at all.

Yes. If bots automated text generators can amplify and perpetuate ideas that appeal to different segments of society then they can worsen the silo mentality that has arisen in recent years. I am quite certain that this is already happening with handcrafted versions of (e.g.) social media posts, so automation will make it happen faster. If someone seeks to de-stabilise a society then it’s a powerful tool

I notice that part of this study is to measure the response to the idea that this generator creates intellectual property. I do not think so because it has not needs. It does not need to be relevant or understood. This generated text is no more intellectual property than a heart shaped McMuffin caused by a glitch in machinery is.

The idea of authorship and whether you could claim the work as yours is really interesting and definitely something that I think will become more important as this kind of technology becomes more widespread. Definitely a useful thing to have access to and something I would use personally.

sadly we are or have already entered this era – as long as the original thought is of value then it has merit – trouble is trying to find that these days If a human creates a story or an article, it belongs to the human. It’s copyrighted [Name of Human Author].

If AI creates a story or an article, does it belong to the AI, or to the creator of the AI? Who’s is the intellect behind the words? Our legislation hasn’t addressed any of the possibilities, has it?