After the experiments, Question 4 was “Do you think you would use this, or a similar feature, in an ideas editor or word processor? Extra features?”

Likart median score was 3, Neutral (actually, balanced). The data shows that this polarised opinion, with positive only slightly more than negative, and few neutrals. There were no score 5, Strongly Disagree with use, only the milder score 4.
One comment suggested that the experimental system (Story Live online tool) was sufficient, and wanted to keep the generating of ideas away from the production tool. 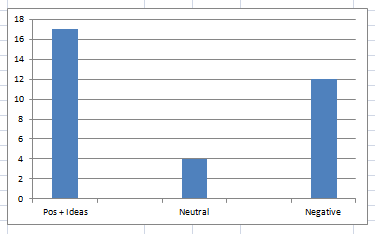 Negative comments: only one of twelve negative comments had any ideas for improvement (8%). The general idea was that use of a machine would interfere with or degrade the human performance. The comments indicate a fear of loss of agency regarding their professional activity, a deskilling, and possible replacement.

“It might gradually weaken my own creative muscle. I’d rather exercise my own brain.”

“It might become habit forming if it were better.”

“It would inhibit my creativity.”

“Sadly I think you are doing the creative world a disservice.”

“I want to use my own creativity, imagination, and learning to create my works.”

Some of the enhancement suggestions are to do with reducing deviation, keeping up a semantic or plot thread, which is not possible with this type of system (GPT-2), which relies on statistics to generate words in sequence, rather than adding or templating any overall meaning or structure. This means it often deviates from the ideas (words) in the input text. Humans perceive this as some sort of creativity or wilfulness on the part of the generator, but it is entirely devoid of motive or awareness. The latest GPT-3 system can keep up the impression for longer, as it is trained on a much larger text body.

“Do you think you would use this, or a similar feature,
in an ideas editor or word processor?”
[Likart 1-5 Strongly agree – Strongly disagree]

“Imagine a generator in your ideas editor or word processor.
What extra features would you like?”

Q4 Use in WP / Extra features

To be able to input a number, for various scenarios to be produced.

I’ve used generators such as this to produce text for my work in the past, but only when I essentially just need some gibberish to throw in there. I can’t say I wouldn’t use a version built into my usual word processor, but it’s absolutely not a feature I would go looking for. It’s very straightforward to copy and paste from an online generator already, and in many ways preferable to doing anything directly within the document I’m actually working on.

More text. I  would really like it if the generator could carry on a conversation with me as in the story I wrote. That would really be interesting and maybe very helpful. Could you possibly make a generator that could discuss ideas? That would be a very valuable asset. It would also improve it if it could ask questions of me   the author as it decided what to generate. Can it more easily generate relevant questions in order to make its response more relevant? Are you using an AI or just a ruled database? An AI to generate a conversation would realy be quite thrilling.

I would not use it.

some sort of step by step options for the direction that the text could take, and an intelligent learning system for giving +1 to the stuff I like and -1 to the stuff i don’t… to avoid repeating themes and phrases that i don’t like, and to guide the text generation more actively

I would especially if trying to come up with a caption or story of some sort. It would be really useful when you have writers block or you are just looking for another perspective as the generated text can be so random that it sparks an idea that you had not previously thought of.  I think if there was some way to determine what kind of output you were looking for like fiction/non fiction or an article or a poem. The outputs were quite random and hard to find something relevant to the prompt without going through a few cycles.

I’d use it sparingly when struggling to progress. It would be good if it could generate at macro level (eg narrative plan) rather than just micro (sentences or paragraphs) Build an archive from my previous work to more accurately accommodate my personal style

Have to be smooth to use

Not sure. It would need to be more sophisticated in terms of the text being generated but maybe that was because I wasn’t used to using it.

Access to databases with relevant information would be helpful

Maybe, I would use it. It’s interesting. Synonyms would be good too.

An option to pick the genre or style.

Might use it if I had it, but wouldn’t seek it out

Something that provides alternative phrases/words perhaps but stays true to the meaning of the text.

The biggest problem I have with this is that using it might gradually weaken my own creative muscle. I’d rather exercise my own brain.

But it might become habit forming if it were better and less frustratingly out of touch with the author’s intentions – the aim of the writing.

I wouldn’t use it.

I would like to be able to input in names of characters, settings and the type of plot, or genre.

No it would inhibit my creativity

This would not really help me in writing something.

I don’t want any extra features. The only possibility I can imagine would be a situation involving writer’s block where one way of dealing with it would be to ask the machine for alternative next sentences. But given it draws these from other writers there is an immediate problem with plagiarism. And you would not know where the extra new text had come from. A bit of a nightmare best avoided.

we are entering the music world here – apple loops – people using them – constructing a piece of music and thinking they wrote it . . . this could be OK for people who have no creative skills (mostly business people ) but sadly I think you are doing the creative world a disservice

I don’t think I’d use it to write. I want to use my own creativity, imagination, and learning to create my works. On the other hand, I’d welcome a research AI assistant. Someone/something I could ask to search the world’s libraries (or out of print books, etc.) for titles / background / information on, for example, details of late medieval village life. That would be useful. But use a feature like this as a writing partner? No.

I think that an autocomplete (like gmail has) for finishing sentences is really handy, but I would want to be able to turn on & off the more complex “ideas” generator